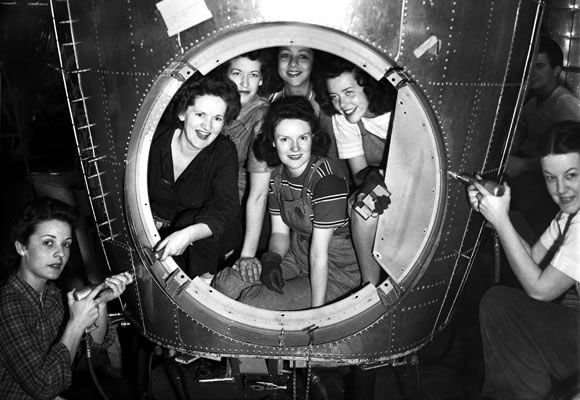 The disparity between male and female construction workers is still shockingly low, with only 9.9% of workers being female. A lower percentage than any of the other major work categories. Take a look at why the figures have regressed after WWII and remained stagnant since then.

During the Second World War, an inspiring one third of the manufacturing, construction and typically male workforce was female, since women had to take over a variety of men’s jobs when they were conscripted.

As time has passed, this figure has only continually decreased, and we are now living in a modern age with very outdated and non inclusive practices in the construction industry. There are a number of potential reasons for this, and the media for one, is largely at fault:

There seems to be lingering perceptions that the construction industry is no place for a woman. Part of the biggest problem behind the gender disparity is that women simply aren’t considering construction as a career path, let alone applying for work and making their mark in the field. Contributory factors to this include negative associations around builders, expectations of misogyny amongst colleagues and misconceptions that construction work signifies intensive manual labour.

Another major factor is that people follow by example. With just 1% of UK workers on the construction site frontline being female, the public aren’t accustomed to seeing women in the industry, and over the years this has not been aided by the media.

Portrayals of Females in Advertising

It’s well known that the advertising of the 50s and 60s was largely sexist, and this no doubt was extended to the construction industry with recurring male-dominated vocabulary and images. Rosie the Riveter, the WWII cultural and feminist icon that represented women who worked in the factories and shipyards, was forgotten and replaced with visuals of women in domestic settings and secretarial office jobs.

These kinds of images from the 50s onwards perpetuated the false idea that women were incapable of being physically and mentally strong, and that they instead required a man to help out with such tasks.

Nowadays thankfully, advertising authorities and construction companies seem to have made a concerted effort to try to equalise numbers by promoting content, particularly for recruitment, that is not gender exclusive and features a mix of cultural backgrounds. The Committee of Advertising Practice enforced a ban on harmful gender stereotypes at the end of last year which should support this even further and encourage female construction workers to be viewed as a social norm.

For millennial audiences however, perceptions are often built more vividly through other forms of media such as TV shows and films, rather than traditional advertising. And this is where the gender gap still prevails.

Since childhood, viewers have become accustomed to programmes such as Bob the Builder and Wreck it Ralph, with male protagonist characters in construction roles. Home improvement shows have been a massively popular TV genre in the US and UK over the last two decades and yet you’ll be hard pressed to find any female cast members, other than the presenter or interior designers.

Major construction programmes in the US, including Build it Bigger, Megastructures, Building Wild and Property Brothers, are exceptionally dominated by male hosts, workers, narrators and even language geared towards male audiences.

It’s positive to see that there are now a growing number of female-led podcasts on the subject. TV and film production studios should take note of this and do their best to champion diversity and inclusivity more in projects of this theme.

Let's break the gender mould in the construction industry!

Our Women in Construction Summit is returning to London's Olympia 9-10 June, 2020. Engage in 2 days of dynamic exchanges, thought-provoking insights and invaluable skill-building, and join a community of people trying to challenge the diversity divide. Secure your seat now or download a brochure to find out more: