50 years ago, Kathryn Ladley began her career in construction as a Student Quantity Surveyor. She caught our attention after posting a shocking rejection letter on Twitter that stated the role 'would not be suitable for a lady.' 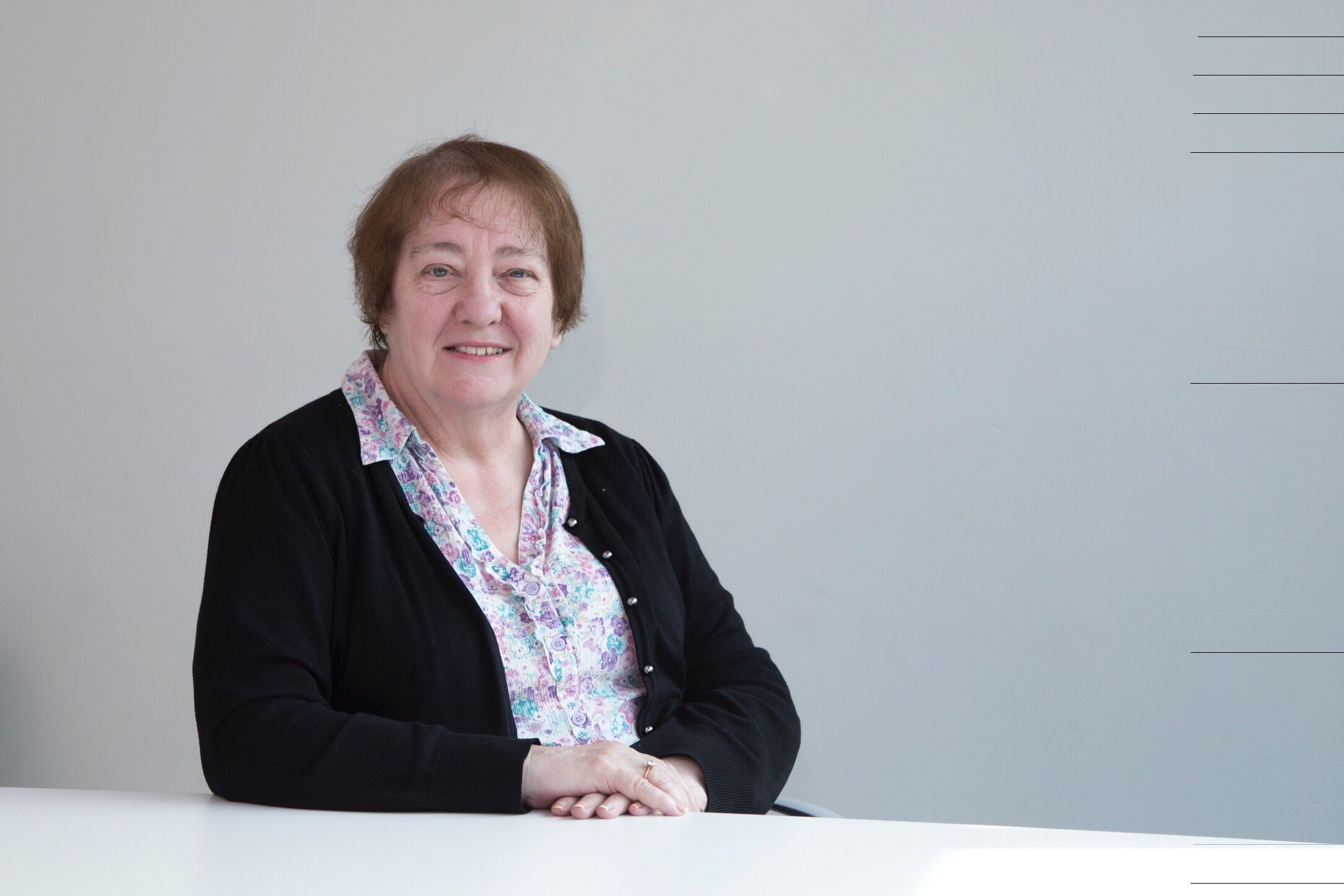 We caught up with Kathryn to find out more about how she launched her career, other challenges she faced, and to share her inspiring story.

Tell us a little bit about yourself?

I am the Associate Commercial Director at NPS Leeds Ltd where I manage a team of Quantity Surveyors, two teams of Building Surveyors, and a Compliance Team.

I am 69 years old, married to my husband, Ian for 48 years. My son, Daniel, is 37 years old and is Professor of Finance at The University of Leicester and a daughter, Amie, who is 30 years old and was in her final year of a Midwifery degree at Leeds University but has been placed in the community in the fight against COVID-19.

My father was a skilled bricklayer who unfortunately died when I was in my final year at Leeds Polytechnic (now Leeds Beckett University) doing my BSc in Quantity Surveying.

When did you decide you were going to start a career in construction, and why?

I’ve always had a love of buildings and architecture and with my father being a bricklayer you could say it was in my blood. I came from a very poor, working class background where money was tight. I passed my 11+ but could only take up my place at grammar school in Leeds because I won a scholarship entitling me to free uniform, bus pass and school meals.  Because of that, by the time I was doing my O Levels I had decided I wanted to leave school to start to earn some money, hence the job application to Norman C Ashton.

Following the rejection letter you posted on Twitter — were there any other similar responses from construction companies? How did you respond?

At that time I applied to a few other construction companies and did get one interview but the results were pretty much the same.  I remember feeling annoyed but not really outraged.  I suppose I thought it was just the way things were then.  It did make me determined to find a way into the industry but I realised I needed to go back to school. 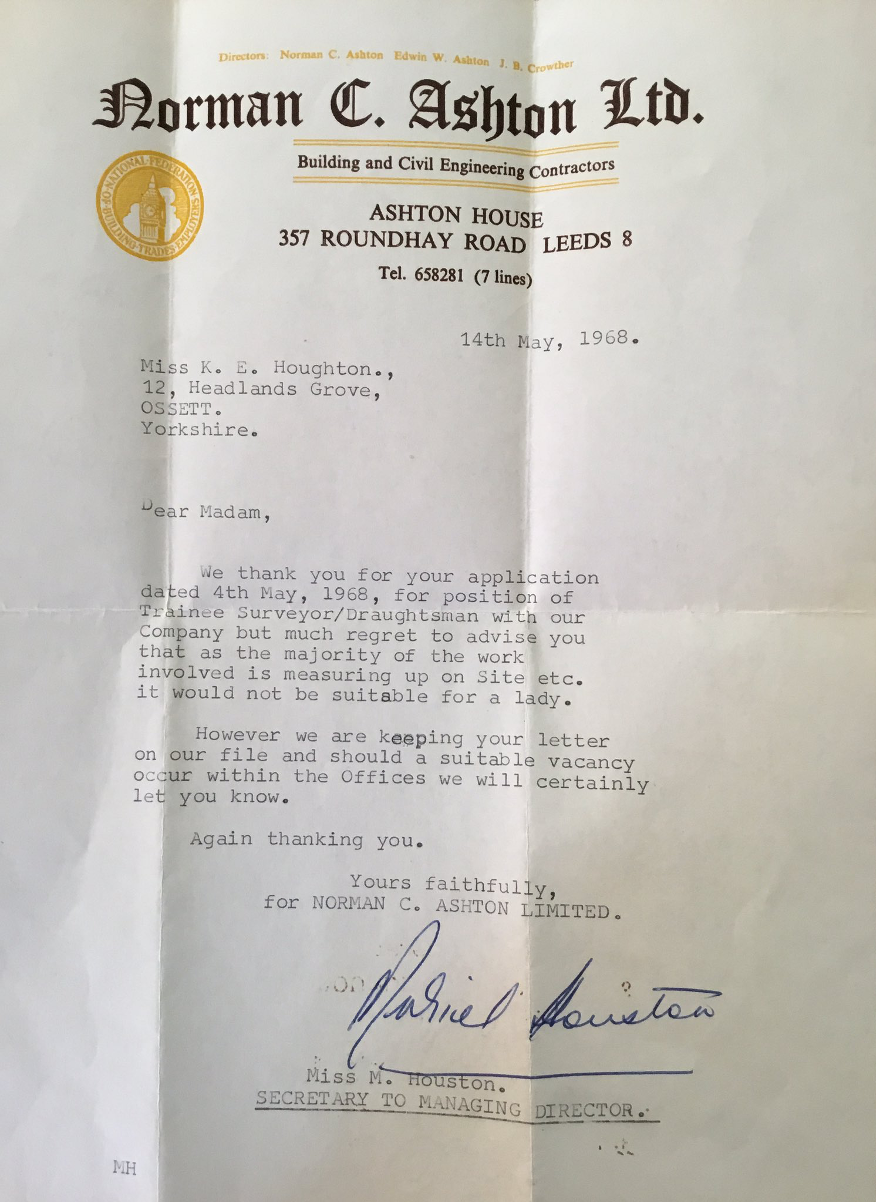 Do you think attitudes have changed much since then? If so, how?

I’d love to say yes, and I suppose in some ways they have. I think it is not such a shock to find a woman in a "man’s job" as it was back then and discrimination and equality laws have helped to reduce the incidences of very sexist comments that occurred all too regularly in those early years.

How did you start your career?

My career started with Leeds City Council where I did my year out in industry after the second year of my course.  I was fortunate to take part in their career programme which meant that following graduation I was committed to going back to the Council for 2 years.  During that time I qualified as a Member of the Institute of Quantity Surveyors and then an Associate Member of the RICS when I was just turned 24.

At that time I was one of three women who were qualified members of both the IQS and the RICS.  The RICS had only 28 female Chartered Quantity Surveyors and the IQS had only 9 female Associate members

What is the biggest challenge you faced while establishing yourself in the construction industry?

I have to say that looking back I was very lucky in being able to work for Leeds City Council. The Council were always very fair and by and large the people were lovely. Of course there were lots of comments, some jokingly delivered, others not so pleasant.

I think one of the more difficult times was when I went back to work after the birth of my daughter. I had never really stopped working after my son was born, but on a freelance basis. When I returned I found I had to be prepared to drop my income expectations considerably and prove myself all over again.

What’s your greatest achievement at work?

Successes have always been around achieving qualifications. I was incredibly proud to become Chartered and again when I became FRICS. And in 2017 I won the European Women in Construction and Engineering Lifetime Achievement in Construction Award.

Do you think enough is being done today to achieve diversity in the industry?

Not sure! There is so much talk about diversity but somehow it doesn’t seem to be having a huge degree of success. Yes the numbers of women and BAME entrants to the industry have increased but we do not seem to retain them.

There has to be more that can be done.

What advice would you give to other women who are considering a career in construction?

All I can say is that I consider myself very fortunate to have spent my working life in a job I love. It fills me with awe that I have played a part in the construction and refurbishment of so many fantastic buildings, and although it hasn't always been easy, it was what I wanted and I was prepared to work for it.

So, if it’s what you want, you should just go for it, but be prepared for it to change the person you are. I used to be a real "shrinking violet" - I don’t think anyone would accuse me of that now!!

Get involved with our Women in Construction Webinar Series - they're all free to attend, hosted by experts in their fields, and cover topics that are especially relevant today!

Keep up to date with the latest insights on our social channels: