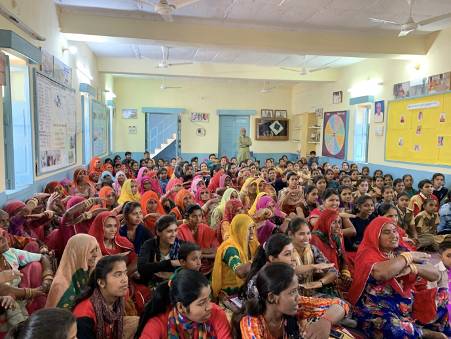 Those words sent to me in a text message towards the end of January were the catalyst of something incredible.

At the time Jean, my mother in law and author of that text message, and Denis her husband were in India carrying out one of their annual inspection visits to two charity projects in the Thar desert of Rajasthan. The projects, delivered by the charity Gravis and funded by the St. Clare and St. Francis Trust, of which Jean and Denis are Trustee and Project Advisor respectively, focus on two key areas; the provision of Water Security in one of the most barren landscapes on earth (receiving less than 200ml of rainfall per year and suffering prolonged periods of drought), and the education and empowerment of women and girls who would most likely otherwise remain unable to read and write, significantly increasing the likelihood that they would continue in a cycle of poverty and isolation.

So what was the crazy idea? Well, Shashi Tyagi who founded Gravis with her late husband Mr. Tyagi, and Shashi’s son, Dr. Prakash Tyagi, had been telling Jean and Denis about their plans for International Women’s Day 2020. They would be hosting events at all of their Skills Centres across the desert, bringing hundreds of women and their daughters together to share inspiring songs, dances, performances and speeches celebrating how far they have come on their journey to empowerment, and putting plans in place for future growth. 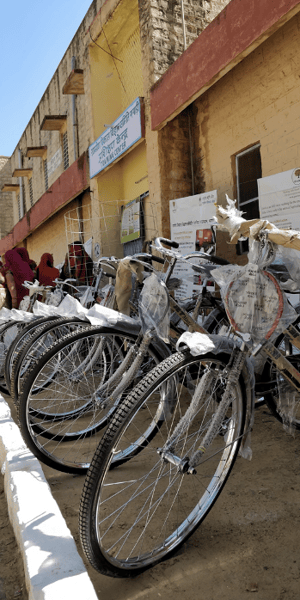 Even more excitingly, the charity would be using this as an opportunity to hand out bicycles, funded by the St. Clare and St. Francis Trust, to 31 girls. This would provide them not only with a vital means of transportation, but also a sense of ownership, responsibility and most importantly, freedom. Jean and Denis made the decision almost immediately that they would return for the event, and having spoken to me about the Skills Centre previously, and knowing that I would want to help in any way I could, they thought it would be great if I could attend, too. The bond between mother and daughter in law in India is very important, with girls often moving away from their own families to move in with their husband’s family when they marry, sometimes whilst they are still only teenagers. With Jean and I being so close it would hopefully be a relationship that those women and girls could relate to.

I replied to Jean’s message with an enthusiastic “yes”, and just over 6 weeks and three plane flights later we landed in Jodhpur! I had never been to India before and was instantly taken by its vibrancy and its rawness – in one sweeping glance you’ll find joy, pain, power and poverty side by side, hand in hand.

As Sunday 8th March 2020 came around I, along with Shashi, Jean, Denis, and a young volunteer from Gravis named Ana Shanti Kaistha, travelled to the Skills Centre for girls in Gagadi to meet the students and their mothers, and a number of male allies. Overall there were 198 people in attendance from the local villages, plus around 30 small children not captured on the official register. The room was crammed full of bodies, and the energy was palpable. 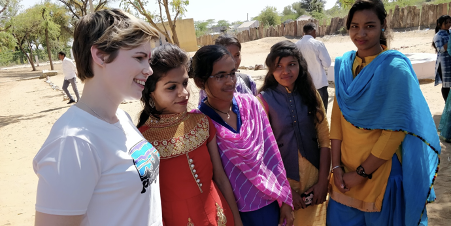 It was particularly important to have men and boys in attendance smiling and at ease with the theme of the day, as I had been hearing from Shashi on the journey to the Centre that over the years of her incredible activism for equality it was common for her to see men forbid the girls and women from attending school or taking part in gatherings that didn’t include men, often with threats of physical violence. On one occasion a young man had even arrived at a meeting of women that his mother was attending to demand that she leave, otherwise he would kill himself. These men and boys have had the monopoly of power in the households and villages for so long, that the implications of disrupting that status quo can seem unthinkable and frightening for them. Therefore, it is important that whilst we empower women we must also bring men along with us on the journey, educating them on the benefits of providing these opportunities for their daughters and wives.

Before we began the festivities of the day I was taken on a tour of the Skills Centre site, meeting some of the teachers and seeing the classrooms where the girls learnt computer skills, sewing, how to prepare spices, and how to read and write. The walls were adorned with pictures of inspirational Indian women such as astronaut and engineer Kalpana Chawla, Olympic sprinter Dutee Chand, former Prime Minister Indira Gandhi and many female heroes from the Skills Centre itself that spend their time working with the students, or tirelessly meeting with parents in the local villages to encourage them to allow their girls access to the education on offer.

Then we all met in the main hall of the centre, the room packed with chatter and excitement in anticipation of the event. Shashi Tyagi reiterated why we were all there, breaking occasionally for the women to clap and cheer, visibly moved by the opportunities being presented to them. Then me, Jean and Shanti each took a turn on the podium to talk about our careers, our life journeys and provide some words of inspiration. Both Jean and I work in environments where women are significantly under-represented, (I work in construction, and she is a priest) and both of our stories echoed the same sentiments – that being kind and caring is not a sign of weakness but rather a sign of great power, and that authority comes from confidence and the belief in your own personal values and self-worth. 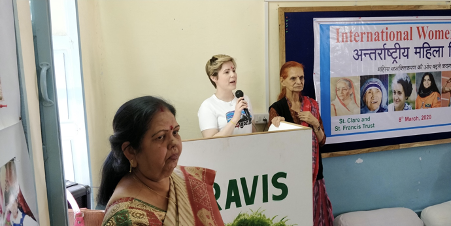 Of all the presentations I’ve delivered in my career, across many events in many countries, this felt like it had the most impact. Despite the language barrier, and the need to break every few words for Shashi to interpret, the instant and positive feedback from the room was extremely humbling, and to see the girls chatter excitedly when I explained that I also had to travel to school by bike at their age made me realise how important it is for them to have role models that they can relate to, even if only in a very subtle way.

Then it was the students turn to present, and they delivered something extremely special. Girls from the age of 11 to 17 stood up in front of a packed room to sing, dance and give speeches demanding that they be allowed independence and education, and pleading for their families support in their journey towards empowerment. For me personally the highlight was Pooja, one of the youngest in the room. She was diminutive in stature and dressed in a beautiful pink tutu dress and flower headband, yet her presence was that of a warrior woman as she proclaimed loudly, “Beti beta eksamaan!” (Son and daughter are equal!), showcasing both extreme strength and extreme femininity in one fell swoop.

After the presentations were finished all of us adopted the gesture for International Women’s Day 2020 and repeated loudly, “Sub brabar hein” (Each for Equal) in Hindi. One woman from the middle of the room spontaneously rose to her feet and rallied us all to get louder and louder, to almost riotous levels of energy, and we laughed, smiled and hugged together. 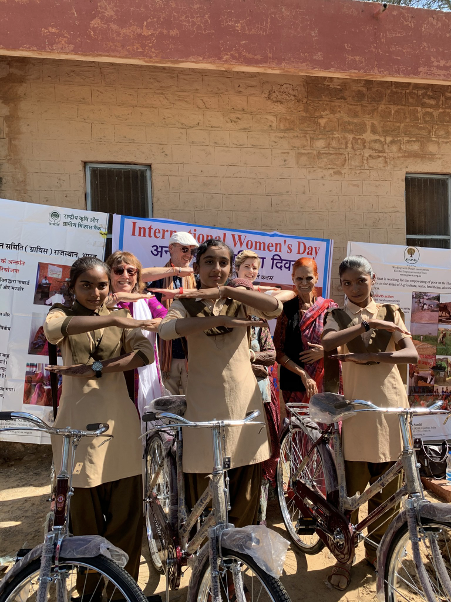 We then went outside, and students, mothers and visitors joined in with some games, and the donated bikes were presented to 31 hugely excited and appreciative girls, which perfectly rounded off the beautiful and celebratory event.

As we drove away and I watched the Skills Centre disappear into the distance, I was flooded with emotion. I was proud of Gravis and the St. Clare and St. Francis Trust for everything they have achieved with their projects, and I was in absolute awe of Shashi and her family for the years of hard work, pain and love they had poured in to improving the lives of thousands of people across India. But I also felt extremely sad and guilty to be leaving when there was still so much more to be done, especially now that I had bonded with these girls and women and experienced first-hand their resilience, ingenuity, strength and humour. A broken piece of my heart had been left there in the desert, having seen the suffering that is still taking place, and knowing that there were still 21 girls and their mothers that never made it to the celebration that day… they had been disallowed to attend by their families, and for that reason were also likely to be the ones most in need of help.

Then just at that moment, at least ten kilometres from the Skills Centre, we saw one of the girls who had been presented with a bike that afternoon cycling down the road, smiling and waving as she saw us. Seeing her there served as a perfectly timed reminder that whilst we have to constantly look forward at what still needs to be resolved, it’s just as important to appreciate those small successes along the way too, because those incremental wins are what ultimately add up to robust and sustainable long term change for the better. 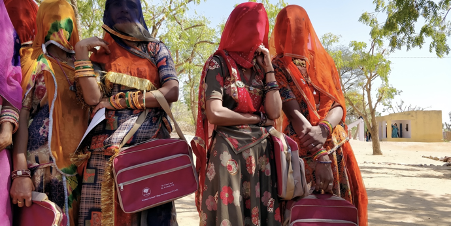 Two days later and here I am. The whirlwind is over, and I am back in my living room in London. I reflect on the work that Gravis do, supported by the St. Clare and St. Francis Trust, and how fundamentally critical it is for the improvement in the quality of life for hundreds of families across India. I am immensely proud that I was able to be a part of it, even in a small way, and I cannot wait to see how else I can assist in the future. 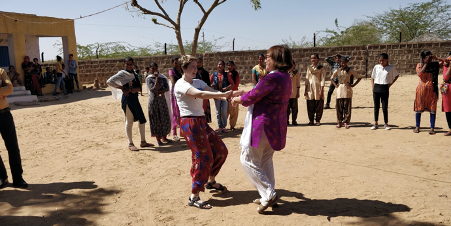 Visit the Gravis website for more information about the charity and how you can get involved: www.gravis.org.in

A core member of Women in BIM, Vicki works hard to support, retain, and provide opportunities for women in the digital construction environment and believes strongly that the industry must diversify in order to successfully digitalise. She works hard to encourage women of all ages and experience to consider construction as a viable and rewarding career option.

Vicki Reynolds will be speaking at the Women in Construction Summit 2020. Hear from her and other industry leaders later this year at Olympia, London.

And don't forget to keep up to date with the Women in Construction World Series on social media: